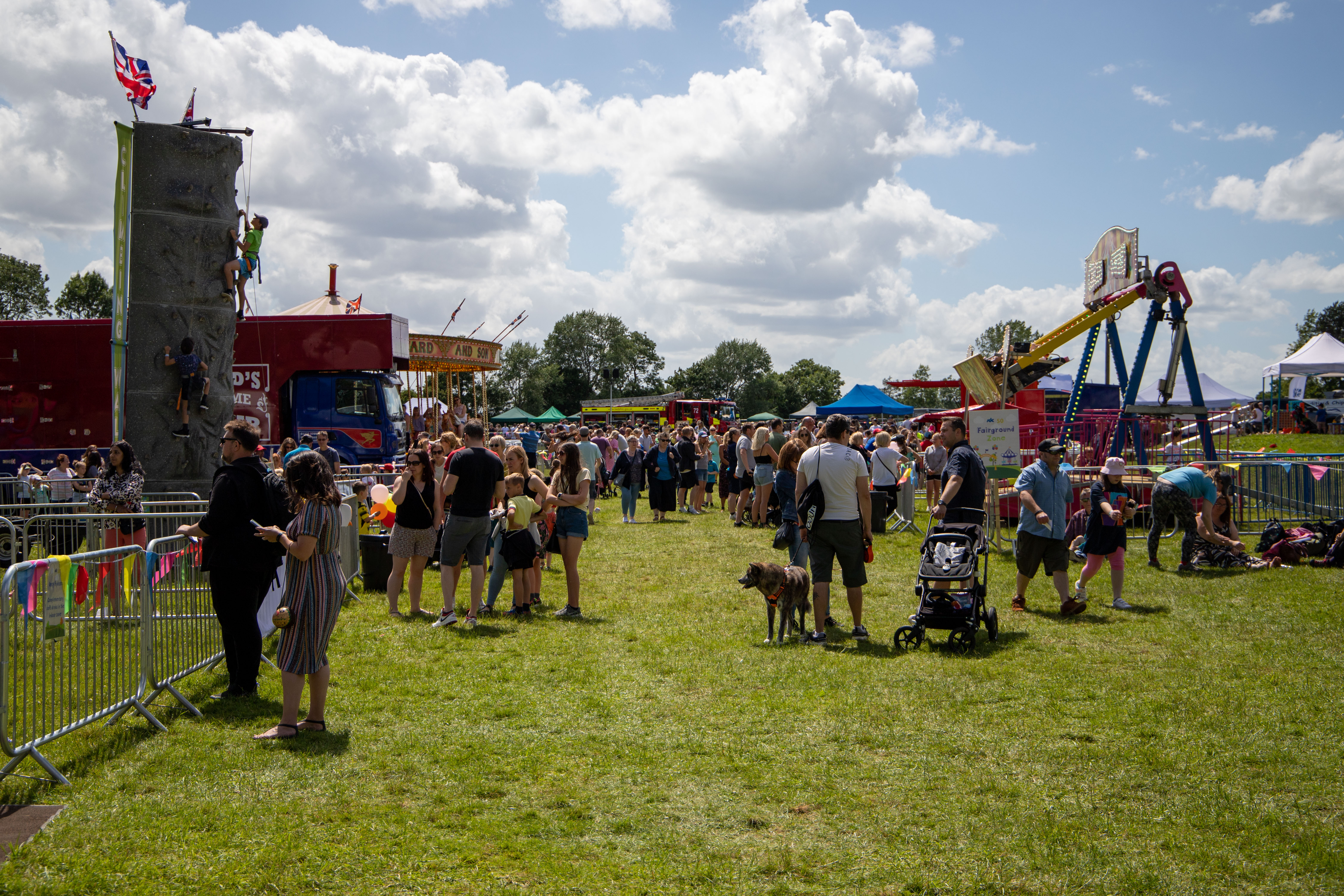 SDC’s Family Fun Day burst onto Bromham Scouts field on Saturday the 11th of June. With the sun already beaming down, and the bunting rustling in the breeze, the ticket desk opened at 10am and the eighth charity event officially began. Employees arrived and eager children sprinted through the gates, strapping unlimited wristbands to their arms ready for a day full of adventure.

The Leslie Sell Activity Centre provided the perfect venue for the occasion, with the central arena stretched out in front of the Scouts Lodge and a woodland area full of activities. The remainder of the space was packed with fairground rides, games, inflatables, stalls, and picnic benches. SDC also refurbished the existing toilets on site in preparation for the event. 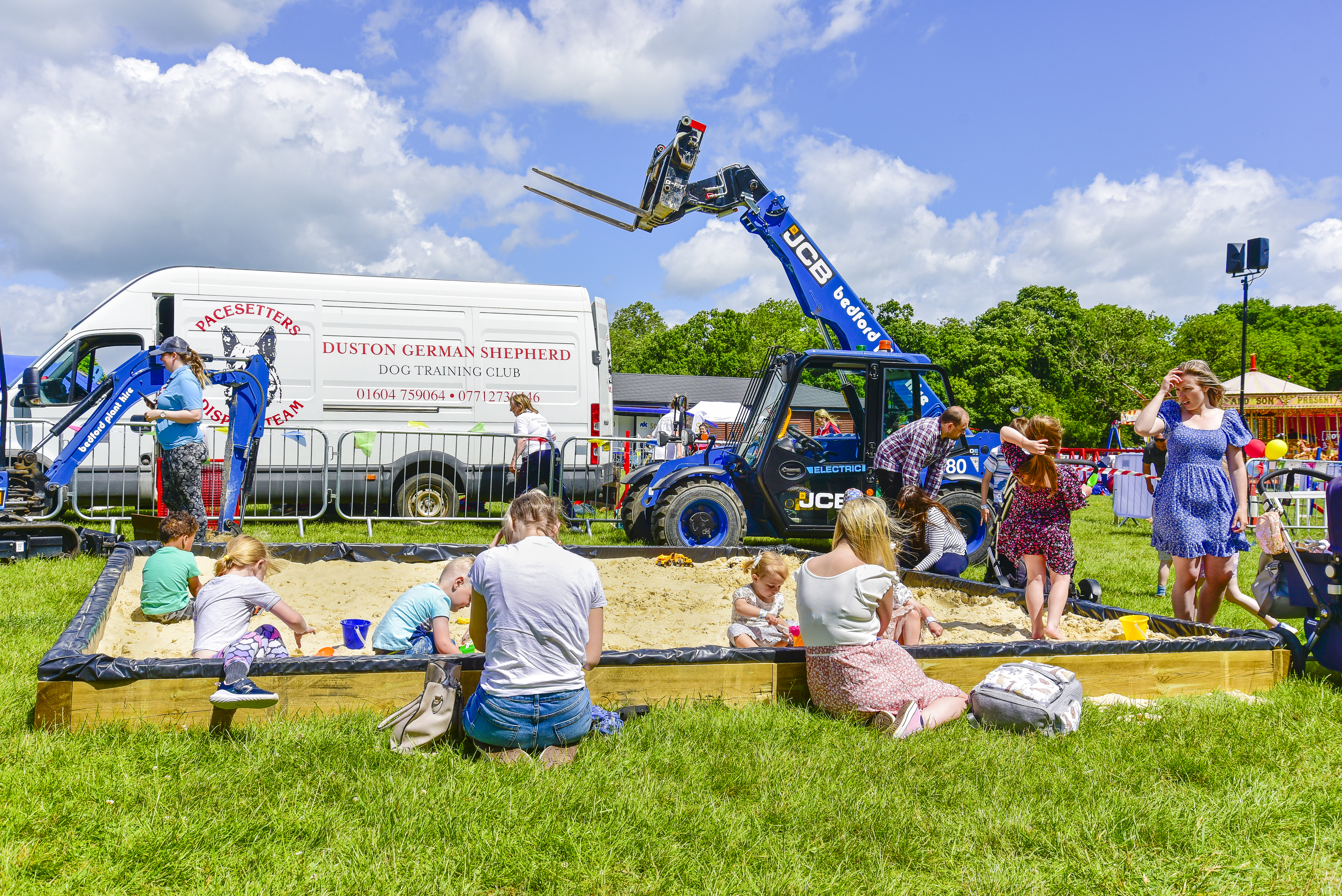 As 11am approached, crowds gathered around the central arena ready for the first show on the itinerary. Pacesetters Dog Display Team bounded out with handlers ready to demonstrate their German Shepherd’s obedience. Running commentary kept onlookers informed and provided helpful tips for dog owners and aspiring handlers. After some sitting, staying, and fetching, the dogs started showing off, with jumps, tunnels, and ramps – proving slightly trickier for some of the more mischievous dogs. The team then set up for their grand finale, with all dogs jumping through flaming hoops of varying sizes and arrangements!

Bedford Town Band then took the next slot in the central arena, with a chorus of trumpets, trombones, and tubas soundtracking the lunchtime rush. The Brass Band played a variety of songs, including some classical tracks, film favourites, and funfair melodies to suit the surroundings. 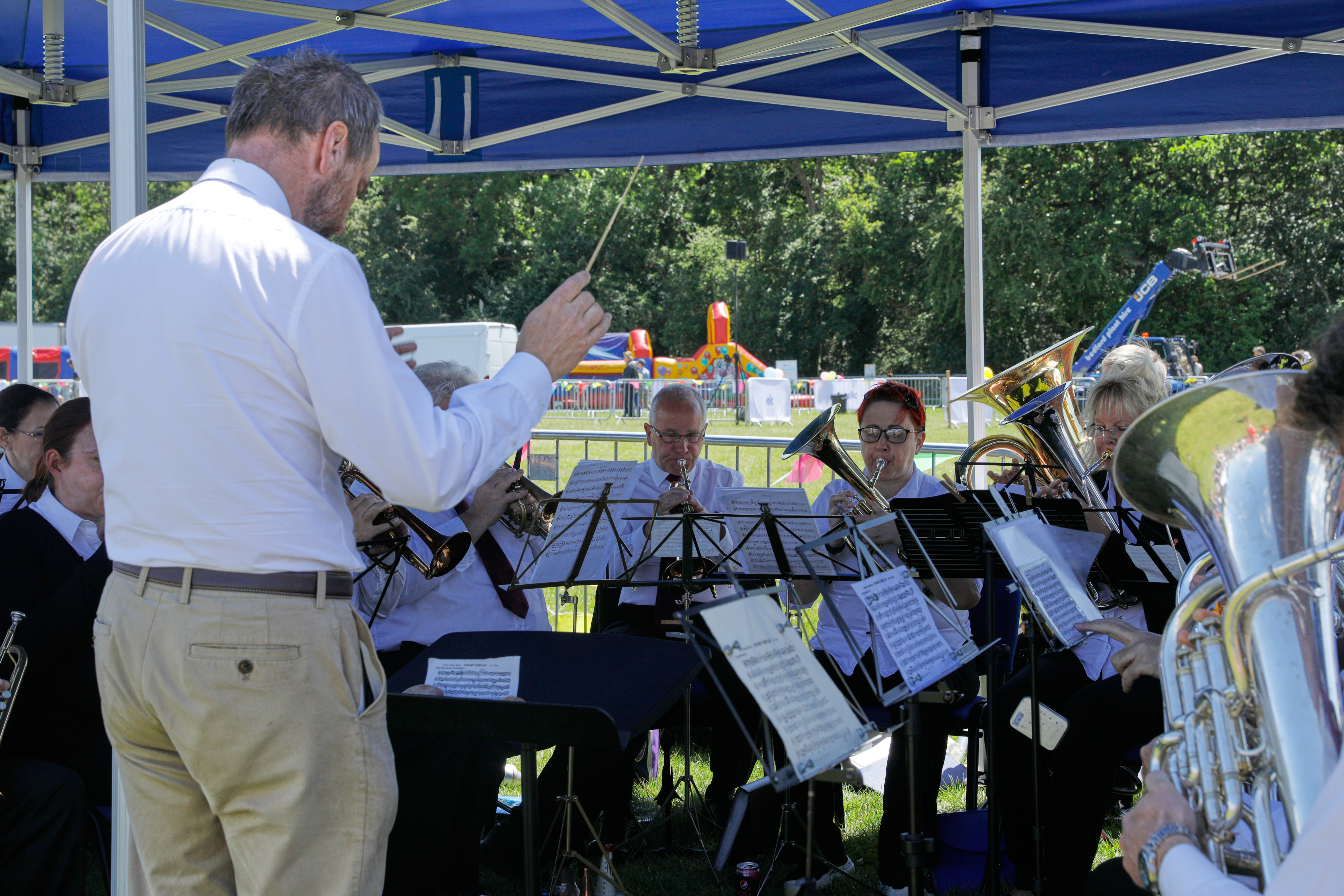 Aside from the central arena shows, there were heaps of free activities to explore at our family fun day. A visit to the Animal Encounters Zone saw children enjoy Animal Edge petting zoo, with the opportunity to hold rabbits and guinea pigs, feed the goats, and brush a pony. The Raptor Foundation bought along a selection of owls from different countries and shared facts and information about the species.

A woodland treasure hunt saw children find hidden clues, while others navigated the pedal karts track, or made s’mores in the forest. We also had a giant sandpit full of toys, and all manner of garden games crafted by our carpentry team and indoor activities, meaning there was something for everyone – all 2000 of you. With an unlimited wristband, children had access to all the fairground rides and inflatables. A vintage carousel, a train ride, a swing ride, bouncy castles, a mega slide, a bungee run, a rodeo bull, last man standing, and obstacles courses were just some of the attractions on offer. We also had a selection of local businesses and charities with stalls. Woodlaw Carving demonstrated his incredible chainsawing skills, Garden City Glitterati glitzed up the event with her glitter tattoos, and stalls from VibaArte, Crafty Foxx, Malawi Orphan Fund, The Resin Earring Studio, Angela’s Serenity, and COCO Giraffe Gifts had shoppers stopping all the way down Boutique Street. SMART, who received a donation from our Easter Walk, also attended with an information stall, raising awareness for their upcoming sleep-out. 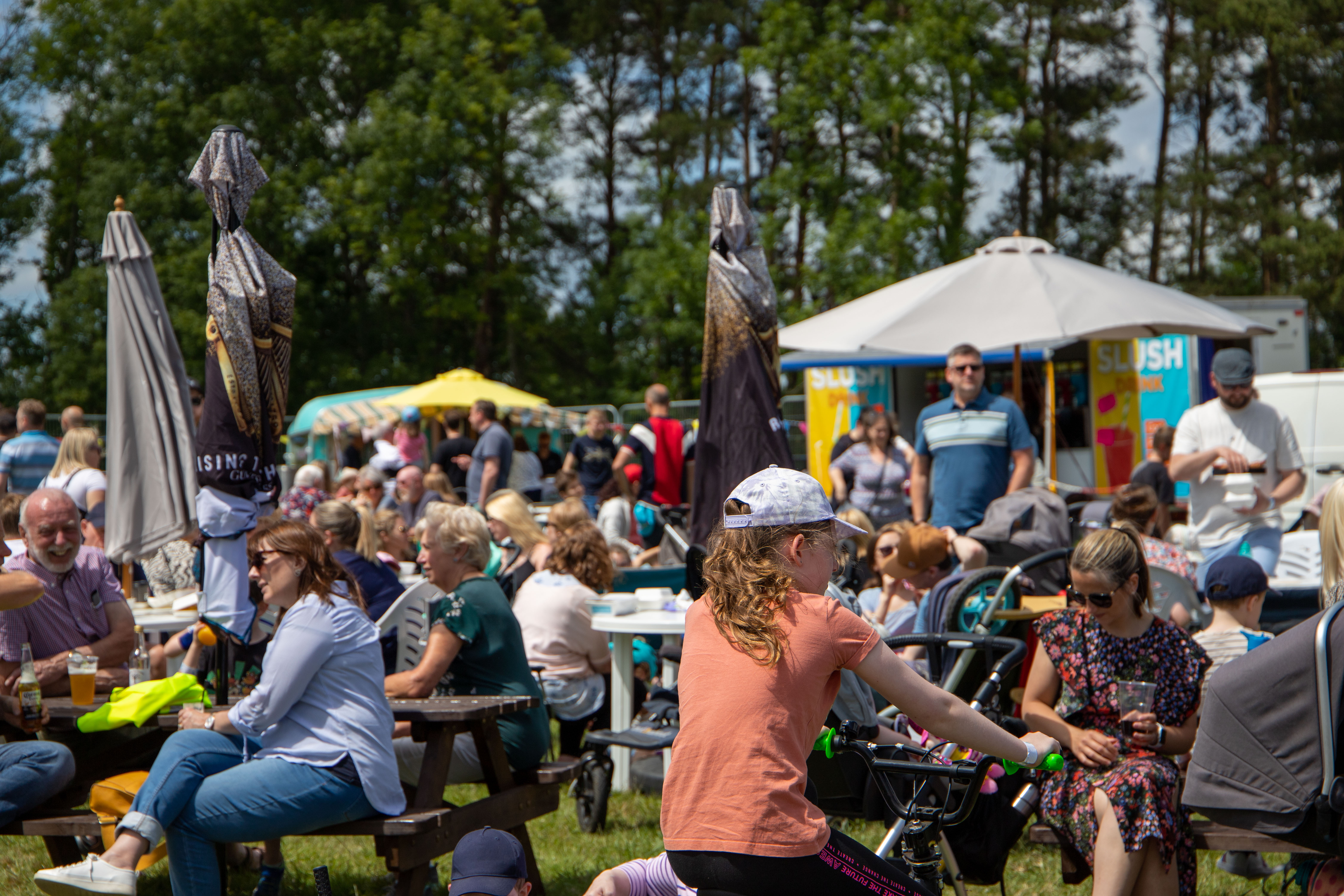 Meanwhile, back in the centra arena, the tug-of-war competition saw Project Managers Tom, Farid, Andy, and Luke chalk up and go head-to-head, or rather, one-end-of-the-rope-to-the-other, to prove their strength, resilience, and teamwork by pulling the flag over the line. Andy’s team was victorious, with only a couple of people falling over!

To extinguish the tension between the teams, Bedfordshire Fire and Rescue then pulled into the arena. Throwing open the doors of their fire engine, visitors could investigate the truck and take a peek inside. Accompanied by SDC’s electric forklift and digger, there was no shortage of machinery for children to play on and explore. The last slot of the day in our central arena, in an event scarcely believable for most, the SDC Directors willingly placed their heads into our homemade stocks ready to face the crowd. Andy Shiner was up first, and as event organiser responsible for the unlimited wristbands, everyone let him off quite lightly. The bravest of our employees then armed their children with soggy sponges ready for a chance to soak SDC’s Chairman Francis Shiner. Spectators watched on joyously as Gary Wykes was dragged up for a turn. Last up was Andrew Mitchell who not only received a wet t-shirt, but also a pie in the face – oops. The award for the dampest outfit of the day however was Gary, who will no doubt be holding a lot of appraisals this coming week. 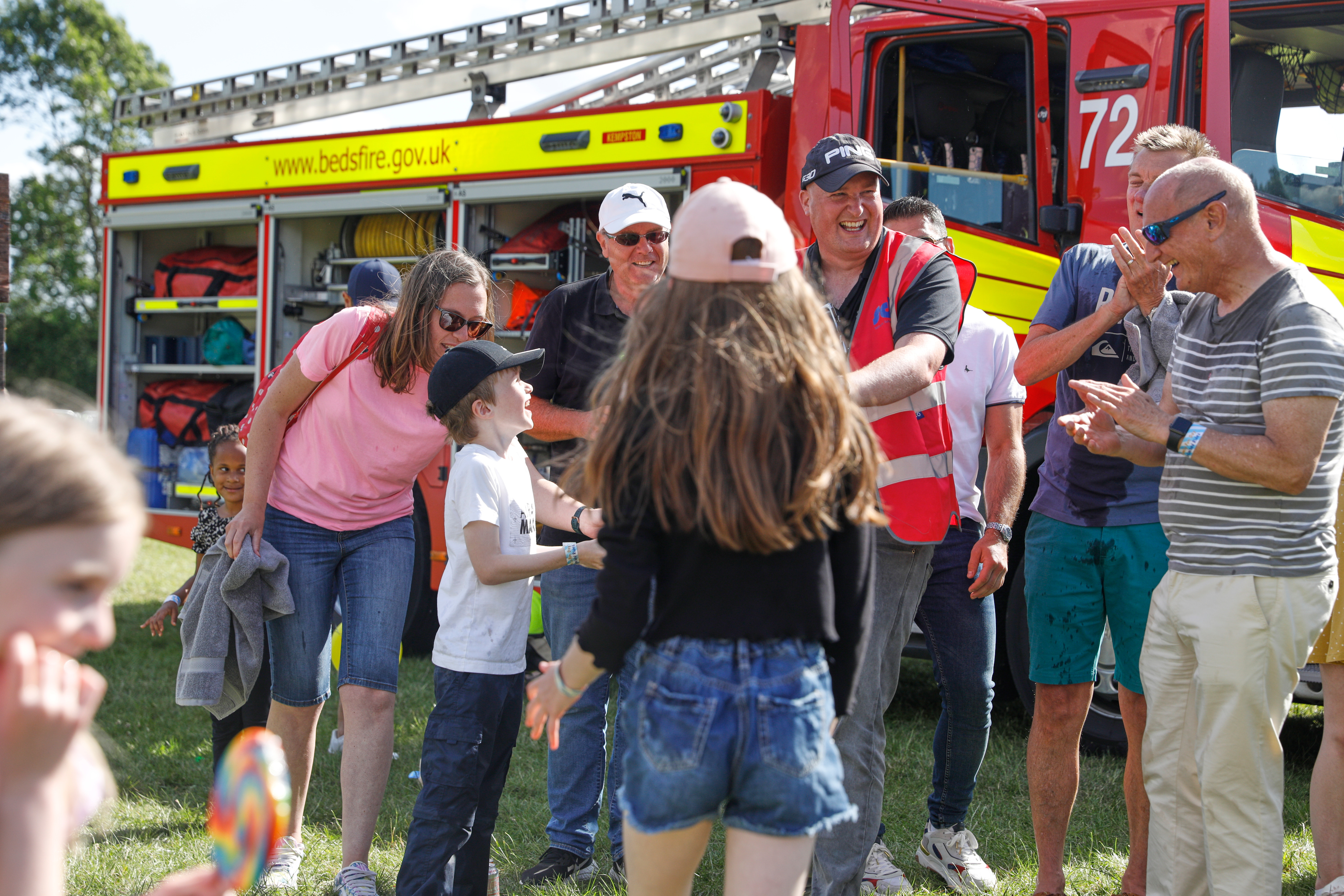 Andy Shiner, Director responsible for organising this event, then took to the stage to thank everyone for attending. Andy thanked the Scouts volunteers and SDC employees for their help, and the event sponsors, MJS Construction and NoHow Recruitment. Andy then concluded his presentation with the gifting of a giant check worth £10,000 to the Bedfordshire Scouts Association.

Shortly after, the crowds looked up as a Hawker Hurricane from the RAF’s Battle of Britain Memorial Flight flew over Bromham campsite at just 250ft, rounding off our Family Fun Day in style. Photos from the day can be found HERE

If you enjoyed this event as much as we did, you can book onto our next one! We'll be making a splash at Box End Park on the 9th July for our Watersports Day! Book your place HERE. 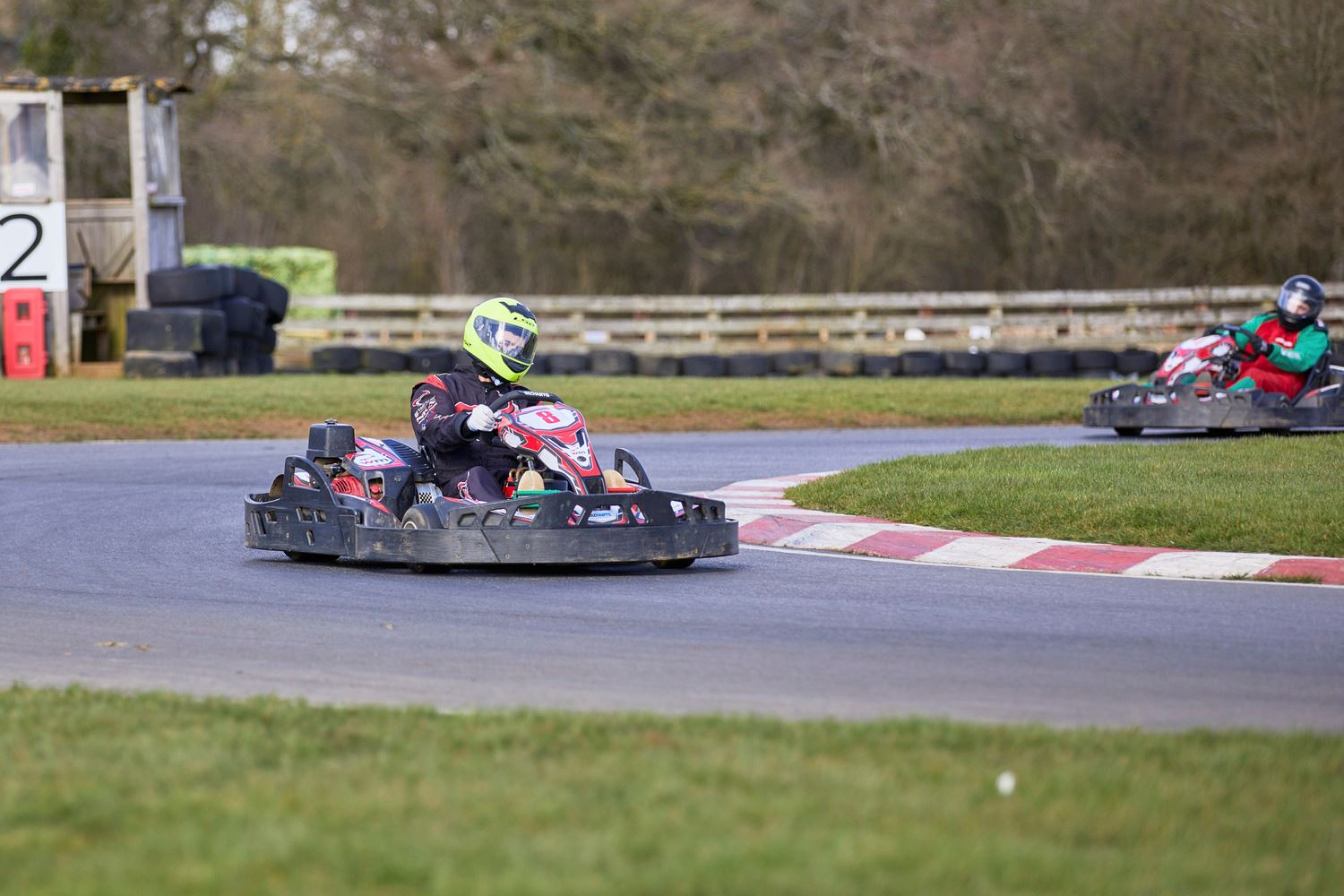